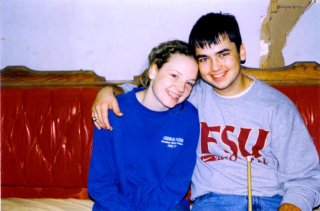 Our first picture together. A mini mission trip with Philly youth to Trinity Land Daycare in Pritchard, AL in December 2001.
In my opinion, it was long overdue, haha! We all know I had been crushin’ on him since 5th grade. He was always a contender for the husband category in the game of Mash and once while playing Life I secretly pretended he was the driver of my mini-van full of kids. Little did I know… 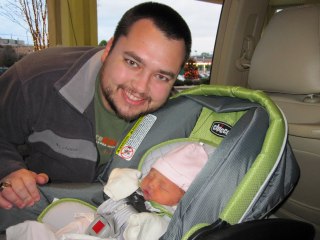 Bringing Lily home from the hospital…in the mini van I said I would never have!
He “asked me out” as we called it then (and maybe still do? I’m a little out of the loop) after an impromptu youth outing after church to Arby’s. He offered to take me home, which was slightly out of his way, but he had a question to ask me 🙂 I don’t remember what his exact words were, but it was a really simple question like, “Would you like to go on a date?”, and I’m sure it took everything in him to ask. He told me in the car that night that it was his first time to ask a girl out without having prior knowledge from other sources if the girl liked him. That’s a big deal in high school! So OF COURSE I said yes, I kind of new it was coming anyway. Our original plan for our first date was thwarted because he went out of town with his family to visit his grandparents in Florida. So we rescheduled for the following Friday, the Friday that ended a week of being counselors at Kids Kamp with Philly (the church we grew up in).
All week at camp I was a nervous wreck. I just knew he would forget the date, even forget that he even asked me, and nothing would ever come of it. However, our last night at Camp Alamisco in Dadeville, AL my little fears subsided. There is a gazebo on a hill between the girls and boys cabins. I guess it’s like a common area. We spent hours (literally) talking about anything and everything in that gazebo. I don’t remember a thing about that conversation, but I do remember it being strange/really awesome that I was able to carry on a conversation with him like he was a really good friend. There was never an awkward silence and we never struggled to find something to talk about. And at the end of the conversation…3am actually…he asked me where I wanted to go on our date the next night 🙂 Then he kissed me on my forehead and we both went our separate ways to sneak back into our cabins without waking anyone.
Fast forward less than 24 hours and he shows up at my house for our first date. Our plans were to go see “Rush Hour 2” at the Summit. I don’t think dinner was in our plans at all. We got to the Summit and the movie was sold out, so we went to Blockbuster and rented “Gone in 60 Seconds”. Brent obviously picked the movie…I would never in a million years pick that movie. We headed back to my house to watch the movie. I was slightly tired (umm, maybe due to lack of sleep the night before?) and decided that the entire couch was mine. Brent sat in the recliner. And just like the title of the movie, I was gone in 60 seconds. Sound asleep. Slept through the whole movie while Brent watched it alone! When the movie was over, he woke me up and I walked him outside. We shared our first kiss (it’s embarrassing, read about it here) and he went home. And I went to bed knowing who I was going to marry. Seriously. I knew he was the one God created for me.
We went to see Rush Hour 2 on our second date and I didn’t fall asleep 🙂
In honor of 10 years, here’s 10 random facts about us:
1.  The ONLY reason I went to Auburn was because he was already there. Yes, I’m that girl, but it turned out really well! Auburn was the only school I applied to and I was accepted before my senior year of high school. If it weren’t for him, I probably would have ended up at Alabama or Montevallo.
2.  Before we were married, we determined that our first boy would be named Michael Cooper. That has changed. The new name will be revealed when and if we have a boy.
3. Brent is loyal to Crest toothpaste and will not under any circumstances tolerate the purchase of any other brand. It doesn’t matter how many coupons and deals I can find.
4.  The first time I went to visit Brent in Auburn (he was there a year before me) he made the most delicious teriyaki chicken on his George Foreman grill.
5. He picked out my engagement ring alone at Southwest Florida Diamond District in Estero, FL (he was living in Fort Myers at the time). The only information I gave him was that I wanted a pear shaped diamond. I figured he knew my taste well enough to know what I wanted. I was right 🙂
6. He calls me “Big Cheeks” and not for the cheeks I sit on! I had my wisdom teeth out the summer after high school. My cheeks swelled for 7 days. Every day that he came to see me, he said my cheeks just got bigger and bigger. The nickname stuck.
7. Brent wants 5 kids, I want 2.5 (not possible I know, but 2 isn’t enough and 3 is an odd number). We’ll see…
8. We want to adopt sometime in our future.
9.  Our first concert together was Creed. He bought me tickets for our first Christmas.
10.  Our first argument as a married couple was on our honeymoon. We ordered pizza one night for dinner. I wanted it delivered to our room because the pizza place was about a 20 minute drive off the island. He called to place the order and said it was for carry-out. We had a nice long 20 minute drive off the island to discuss why my idea was better…and a 20 minute drive back to the resort for me to apologize for being a brat and for him to apologize for not reading my mind. Haha 🙂

Here are some pics from our dating years, in no particular order:

The day Brent moved into his apartment in Auburn 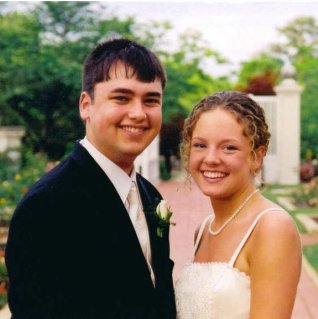 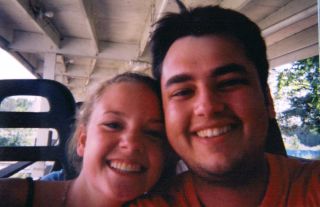 After the Scream Machine at Six Flags

At a Shane and Shane concert in high school 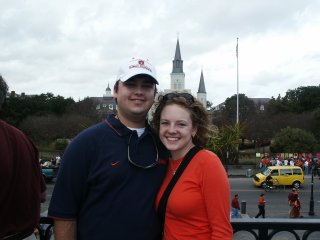 Brent’s last day in Auburn…eating at our favorite breakfast spot, the BBQ House 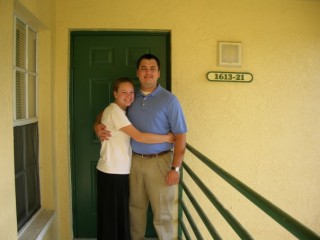 Leaving Brent in Fort Myers for his first grown up job. I thought being 12 hours away from him would last an eternity, but we were engaged 6 months later and married 11 months later. 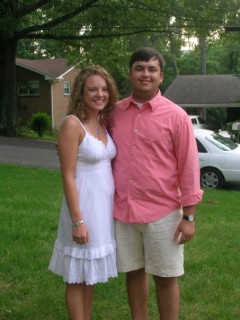 My 21st birthday…our last date before he moved to Fort Myers. 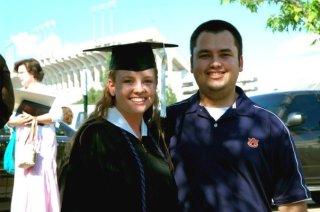 At my Auburn graduation

At Toomer’s Corner after a win! 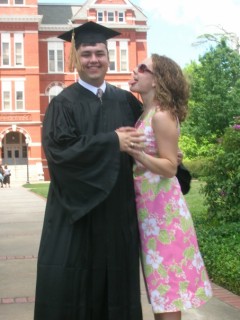 Brent’s Auburn graduation
What can I say? I love this boy 🙂 I’m so grateful to God for a husband that loves the Lord more than he loves me.

5 thoughts on “What happened 10 years ago today?”