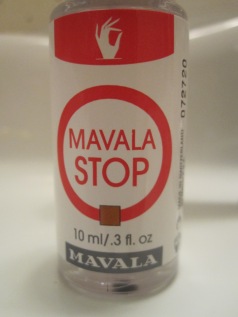 we had a little intervention this week with Lily’s thumb sucking.

Sweet girl has been sucking her thumb since the day she was born, and probably in the womb as well but we don’t have any proof of that. 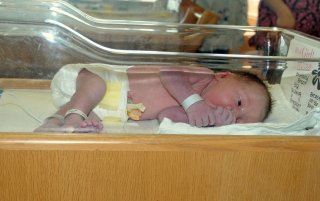 Naps and bedtime were the only time she ever sucked her thumb, so we ALWAYS replaced it with a paci by doctor’s orders. This, of course, was for the purpose of Lily eventually taking only the paci then we could eventually take the paci away. Wouldn’t it be wonderful if all babies did exactly as they were told? Instead, she never showed favor for one over the other and continued to suck her thumb/take a paci. So, at Lily’s first dentist appt. in Dec 2011 Dr. J said to take the paci away and then we would tackle the thumb at our next visit. Lily has been without the paci since March. This past week Lily had another appt and he suggested trying Mavala. He said she’s a pretty aggressive thumb sucker so we have to be pretty aggressive with stopping the habit. Cold turkey.

I told Lily that Dr. J gave us some new fingernail polish that we have to wear everyday. She willingly lets me put it on her everyday.

She’s super smart, but by the grace of God she hasn’t made a connection between the HORRIBLE taste on her fingers and the polish we put on her everyday.

Her reward? M&Ms with her breakfast or afternoon snack. So far, there’s only been one occasion that she didn’t get any! 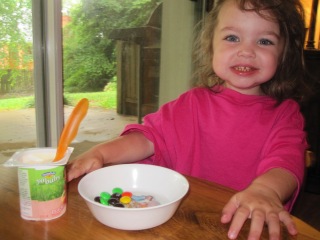 I am one proud Mommy! Lily is trying SO hard not to suck her thumb and I give her praise constantly to show how proud I am of her. She has way more discipline than a 2 1/2 year old should be expected to have. She’s willing to suffer to fall asleep in order to have a long term good result rather than giving up easily and sticking the thumb in her mouth. She’s is showing such maturity and determination, even though she would rather give in!

One of my favorite things about Lily is that when she sucks her thumb/paci she also plays with her eyelashes. 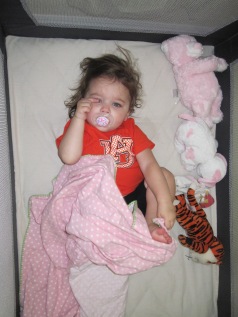 I was getting a little sad that she wouldn’t do that anymore. It’s something she’s done since she was an infant and I hate to see that trait go. But, she still does it even without her thumb. Yea!!!

There are times I feel like we are breaking her of a nicotine habit. When it’s nap/bedtime she has a ridiculous amount of nervous energy and she has a hard time calming down. And if it’s not the nervous energy, she cries for a good hour or so before she finally falls asleep. I’ll rub her back, arms, play with her hair, sing, etc. to help calm her down before I leave her room. It’s so hard not to go back in her room when she’s crying for me, but I have to remember that she’s basically learning how to fall asleep on her own again.

She’s been a fantastic sleeper since she was 3 months old. Even all her ear infections never kept her from sleeping through the night. So I know that once she figures out how to fall asleep without her thumb, we’ll be back to normal. Until then, it’s late nights and weird naps.

As with all things…it’s just a season and I’ll miss it when it’s over. So I’m reminding myself to be thankful for the late nights and weird naps. I’m hoping by the time we go to the beach in August we can say a forever goodbye to the habit!