We had a rough start. One that she will never let me forget. And she remembers details that I’m sure never existed. Ya know, because those teenagers like to blow things out of proportion just a bit. I know that because the teen years aren’t very far behind me.

I jumped at the opportunity to lead a group of girls at a Disciple Now weekend in Feb 2008. I imagined a weekend of digging into God’s word and having deep discussions on how to grow in Christ and live more like Him. 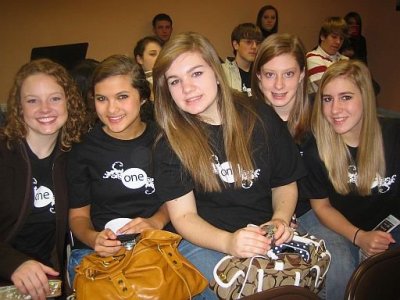 Those imaginations quickly became long lost dreams when I became the bad guy for making the girls put their cell phones away and be quiet so our host family could get some sleep.


Not quite the life-changing weekend I hoped for.

Two months later I was asked to be the SS teacher for those same girls. I joyfully accepted it. A chance to redeem myself because I know they’ll like me eventually. 🙂

Kayla, Mary, Ramey, Tori, Whitney, Katie, Me at a spend the night party at Katie’s house

A few months into it, I remember sitting in our SS room with peach walls, a low ceiling, and no windows. Mrs. Lisa by my side so I was never alone when the girls wanted to attack me about my habits of following the rules.


I had my stack of prayer journals. Probably 10 or so. Journals that I have been keeping since I was in 5th grade because there was once a teacher that poured into my soul and gave me my first prayer journal. Erin is her name. It rocked my world and caused my relationship with Christ to grow tremendously. I wanted the same for these girls.

So I showed them my stack of journals, not to toot my own horn, but just to show them real evidence of God’s answers to prayers throughout my life. With tears in my eyes, I read to them a prayer. A prayer for them, long before I knew them. It was a prayer I had written shortly after Brent proposed to me. Knowing I would be moving to Fort Myers I prayed for an opportunity to disciple a group of girls. That never happened in Fort Myers.


But in that peach room with a low ceiling and no windows in Athens, AL, it did. I began to disciple an amazing group of girls that will never be forgotten.


Kayla is one of those amazing girls. And she’s moving to Texas. And I’m going to miss her A LOT. 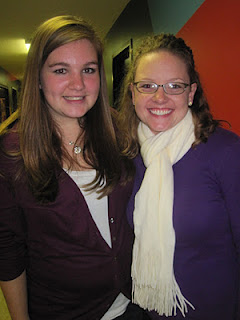 Kayla at our going away party at church in November 2011

Not to mention she is a faithful reader of my blog and cries every time I post something. I’m sure this post will be no different.
Kayla, I will miss you dearly (well, I already do since I’m the one that moved away first). God has good and perfect plans for you in Texas and I pray you continue to follow hard after Him. Seek Him first, and everything else you need will be given to you as He sees fit. I pray that you will make solid friendships that encourage you to walk in your faith. And I pray you never get stuck in anyone’s house past midnight because a pit bull is waiting to eat you alive right outside the front door. May the Animal Control in Texas care more about your life than they do in Alabama. Love you!