Bad Dave has always been bad. He’s in a cave with bears and has been there for at least a month.

New Dave was good but turned bad. He recently joined Bad Dave in the cave with bears.

Sister? SHE’S HORRIBLE!!! However, she’s a girl so she just goes to time out with she gets bad.  At least that’s Lily’s logic. Girls go to time out, boys go to the cave with bad bears.

Wonder if that will be true for Scott???

“Because Sister told me to” is 9 times out of 10 Lily’s reason for doing whatever she did that was wrong. Talk about peer pressure at 3 years of age from someone who doesn’t exist.

Sister is also to thank for Lily’s made-up words, songs, dances, and stories that make no sense whatsoever.

I can’t tell you how many times I’ve heard one of Lily’s explanations or stories and, when I ask who told her that, she says “Sister told me.”

Lily talks about Sister at the dinner table, on her play set, in the car, when she’s going to bed, etc.

She also talks TO Sister at the dinner table, on her play set, in the car, when she’s going to bed, etc.

Lily tells me stories about Sister that are absurdly out of left field made up and then Lily just cracks up like she can’t believe Sister would do something like that.

Sister is so common around here that sometimes I find myself acting like Sister is real.

Knowing that Lily despises anything lemonade, I knew the finished product wouldn’t be consumed. But, Lily and I always enjoy cooking in the kitchen together…and if Sister is there it’s sure to be an adventure. I was in this for the process, not the actual pie. So I found a recipe on Pinterest that involved very little ingredients. Sweetened condensed milk, frozen pink lemonade, cool whip, and a graham cracker crust.

Here’s what our pie should look like, thanks to this recipe. Looks very sweet and refreshing. Perfect treat on a hot day. 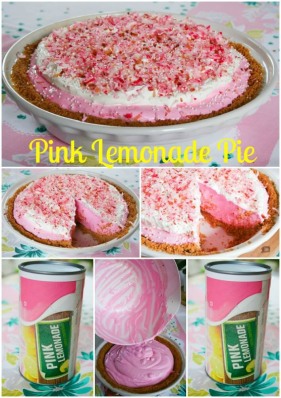 But because I was spending money on the process, not the pie, I didn’t make my own crust, I didn’t buy pink food coloring, I didn’t color coconut shreds, and I bought the cheapest ingredients on the shelf. I also, by the end, just flat out did not care about the looks of the pie. Thus, this picture:

Just a messy pink blob. I didn’t even bother to finish spreading the fake cool whip because the pie shell wasn’t deep enough and the pink mess was just spilling over the sides all over the counter. I just slapped the plastic lid on top and threw it in the fridge. Looks delish.

But it was about the process, right? 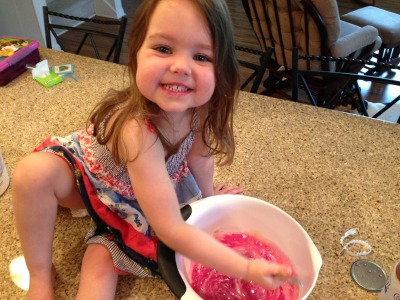 Stirring the condensed milk and lemonade together. There’s a beautiful smile on her face because she had not yet tasted the pink blobby mess. She HATED it. I think Lily was a bit disappointed. Sister raved for a whole week about this pie; I’m sure Lily believed it would be delectable. If you look closely, you can see Sister sitting on the counter on the right side of the pic. She was probably jumping on the counter and spitting in the bowl.

Lily found something she did like. The 16 oz tub of whipped topping. She kept sneaking her little hand in the tub and eventually said, “Mommy I’m not going to eat all of this, I promise.” But that quickly turned into, “Mommy, can you just put some on a plate for me?” Umm…no.
The pie that won’t be eaten is now chilling in the fridge for several hours. The recipe suggested to not use the whole can of lemonade. Well, I did because it all just kinda came out at once and I sure wasn’t about to try to scoop it out. I’m sure the pie will be too mushy and runny to eat.
Maybe Sister will eat it?

One thought on “Another horrible decision brought to you by "Sister"”